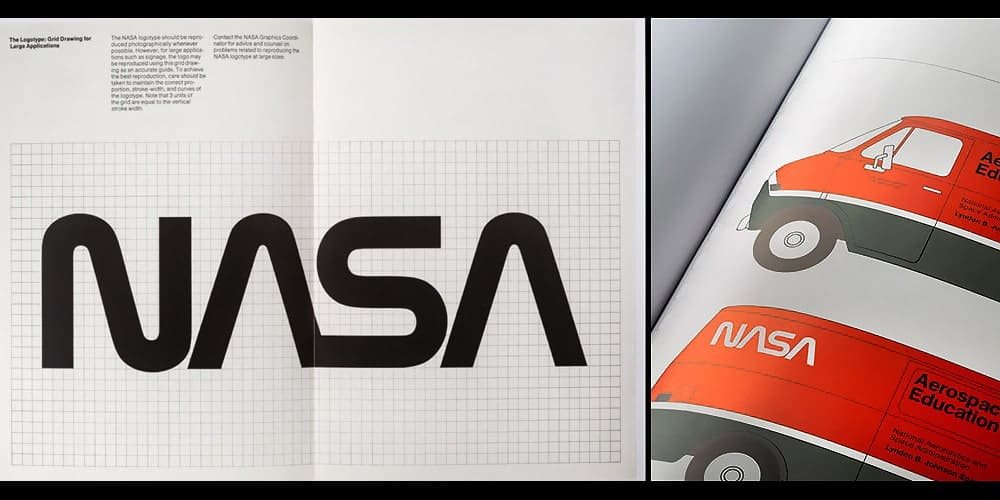 The NASA Graphics Standards Manual, by Richard Danne and Bruce Blackburn, is a futuristic vision for an agency at the cutting edge of science and exploration. Housed in a special anti-static package, the book features a foreword by Richard Danne, an essay by Christopher Bonanos, scans of the original manual (from Danne’s personal copy), reproductions of the original NASA 35mm slide presentation, and scans of the Managers Guide, a follow-up booklet distributed by NASA.

In 1958, the United States Congress created the National Aeronautics and Space Administration. A young President John F. Kennedy set the deadline of landing a man on the moon and returning him safely to earth by 1970. Project Mercury and Apollo flights 1 through 10 brought them closer, until 1969 when Neil Armstrong succeeded and uttered those famous words: ‘That’s one small step for man, one giant leap for mankind.’

The Apollo program ended in 1972 and the agency that went to the moon and showed us our first image of the earth struggled to retain the romance and urgency of its past missions.At that time, President Richard Nixon pushed government departments to raise the standard of their design and communications, which trigged the National Endowment for the Arts (NEA’s) ‘Federal Graphics Improvement Program’.

One of the first targets for the NEA program was NASA, and the NEA wanted to get a big win on the scorecard. Shortly after, a young and small firm in New York, Danne & Blackburn, received a Request for Proposal (RFP). They were eventually selected to present a new identity to NASA. In 1974, the partners of the firm – Richard Danne and Bruce Blackburn – presented to NASA administrators in Washington D.C.

The work was accepted and would be contained in a ring binder titled the NASA Graphics Standards Manual, an extensive document that included instructions on designing every aspect of NASA’s new identity – from letterheads to space shuttles. The new identity, spearheaded by a logo that would come to be known as the ‘Worm’, allowed NASA’s departments a common voice through which they could speak as one cohesive unit.

After a less than smooth introduction by NASA, the identity program was rolled out across the organization. But after almost two decades, and many challenges along the way, NASA rescinded the Worm in 1992. The first logo, known as the ‘Meatball’ was reinstated. 24 years after later, Jesse Reed and Hamish Smyth – Pentagram Associate Partners and creators of last year’s 1970 NYCTA Graphics Standards Manual Reissue – reached out to Danne to reissue the NASA Graphic Standards Manual as a hardcover book. He said yes.