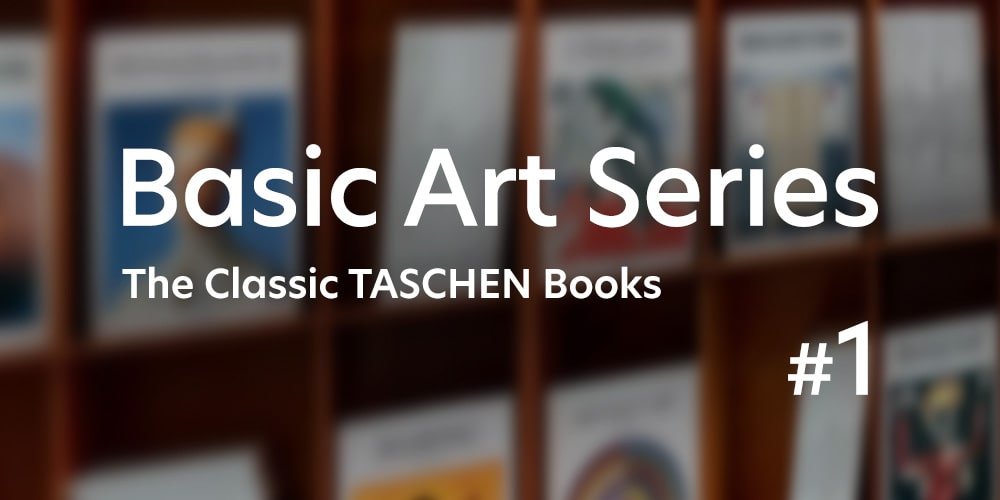 This article gives information about Abstract Art, Abstract Expressionism, Bacon, Bauhaus books. These art books are part of the Basic Art Series published by TASCHEN. The art books in this article contain comprehensive information for an artist or designer.

Abstraction shook Western art to its core. In the early part of the 20th century, it refuted the reign of clear, indisputable forms and confronted audiences instead with vivid visual poems devoid of conventional representational imagery and characterized by allegories of emotion and sensation. This radical artistic adventure established new artistic means, as much as narratives. The expression became characterized by shocking juxtapositions of color, light, and line.

Artists abandoned the conventions of brush and easel and played with new materials and methods of artistic gesture: commercial paints and housepainter’s brushes, working on unstretched and unprimed canvases, moving the canvas to the floor, and applying paint with hands.

This essential introduction spans the international breadth, conceptual depth, and seismic impact of abstract art with a thorough survey not only of the big names such as Picasso, Klee, Kline, Rothko, and Pollock, but also lesser-known figures who made equally significant contributions, including Antoni Tàpies, K. O. Götz, Ad Reinhardt, and Sophie Taeuber-Arp.

The author: Dietmar Elger studied art history, history, and literature at the University of Hamburg. In 1984/85, he was secretary of Gerhard Richter’s studio and between 1989 and 2006 curator for painting and sculpture at the Sprengel Museum, Hanover. He has organized numerous exhibitions on modern and contemporary art and has directed the Gerhard Richter Archive at the Staatliche Kunstsammlungen Dresden since 2006. For TASCHEN he has authored the volumes Expressionism, Dadaism, and Abstract Art.

From vast, splattered canvases to quiet pools of color, enter the world of Abstract Expressionism, the movement which put feelings into paint and turned New York into the global center for contemporary art. This book features works from 20 key artists, including Jackson Pollock, Philip Guston, Robert Motherwell, Mark Rothko, and Willem de Kooning.

Hailed as the first American-born art movement to have a worldwide influence, Abstract Expressionism denotes the non-representational use of paint as a means of personal expression. It emerged in America in the 1940s, with lead protagonists including Jackson Pollock, Philip Guston, Robert Motherwell, Mark Rothko, and Willem de Kooning.

Abstract Expressionism spawned many different stylistic tendencies but two particularly prominent sub-categories: action painting, exemplified by de Kooning and Pollock, and color field painting, made most famous by Rothko. Throughout, Abstract Expressionists strove to convey emotions and ideas through the making of marks, through forms, textures, shades, and the particular quality of brushstrokes.

The movement favored large-scale canvases and embraced the role of accident or chance. With featured works from 20 key Abstract Expressionist artists, this book introduces the movement which shifted the center of art gravity from Paris to New York and remains for many the golden moment of American art.

The author: Barbara Hess (b. 1964) is an art historian, critic, and translator and resides in Cologne. Her numerous articles on contemporary art have been featured in Camera Austria, Flash Art, Kunst-Bulletin, and Texte zur Kunst. She co-curated the touring exhibition Ready to Shoot: Fernsehgalerie Gerry Schum/videogalerie schum at the Kunsthalle Düsseldorf and the Musée d’Art Moderne de la Ville de Paris.

Bacon: Forms of Feeling – The Human Body In Distress

A concise and gripping encounter with Francis Bacon, one of the most individual, powerful, and disturbing painters of the 20th century. Emerging into notoriety in the period following World War II, Bacon developed a unique figurative form, distorted, dismembered, and writhing with intense emotional content. Largely self-taught as an artist, Francis Bacon (1909–1992) developed a unique ability to transform interior and unconscious impulses into figurative forms and intensely claustrophobic compositions.

Emerging into notoriety in the period following World War II, Bacon took the human body as his nominal subject, but a subject ravaged, distorted, and dismembered so as to writhe with intense emotional content. With flailing limbs, hollow voids, and tumorous growths, his gripping, often grotesque, portraits are as many reflections on the trials and the traumas of the human condition as they are character studies. These haunting forms were also among the first in art history to depict overtly homosexual themes.

The author: Luigi Ficacci studied art history in Rome under Giulio Carlo Argan. For many years, he was curator at the Istituto Nazionale per la Grafica in Rome and lectured at various Italian universities. From 2007 to 2015, he was Bologna’s general museum director (Soprintendente ai Beni Culturali); today he is general museum director in Lucca. The focal points of his research work are the issues raised by the 17th and 18th century and contemporary Italian and European art.

Bauhaus: Designs of The Time – The Most Famous Art School of Modernity

Despite being shut down by the Nazis after just fourteen years in existence, the Bauhaus art school stands as one of the defining movements of modern history. This book introduces the school’s commitment to creative expression, cutting-edge ideas, and the combination of fine art and technology in a utopian future. In a fleeting fourteen-year period, sandwiched between two world wars, Germany’s Bauhaus school of art and design changed the face of modernity.

With utopian ideals for the future, the school developed a pioneering fusion of fine art, craftsmanship, and technology to be applied across painting, sculpture, design, architecture, film, photography, textiles, ceramics, theatre, and installation.

As much an intense personal community as a publicly minded collective, the Bauhaus was first founded by Walter Gropius (1883–1969), and counted Josef and Anni Albers, Wassily Kandinsky, Paul Klee, Oskar Schlemmer, Gunta Stölzl, Marianne Brandt and Ludwig Mies van der Rohe among its members. Between its three successive locations in Weimar, Dessau, and Berlin, the school fostered charismatic and creative exchange between teachers and students, all varied in their artistic styles and preferences, but united in their idealism and their interest in a “total” work of art across different practices and media.

This book celebrates the adventurous innovation of the Bauhaus movement, both as a trailblazer in the development of modernism and as a paradigm of art education, where an all-encompassing freedom of creative expression and cutting-edge ideas led to functional and beautiful creations.

The author: Magdalena Droste studied art history and literature in Aachen and Marburg. From 1980 she worked at the Bauhaus-Archiv in Berlin, after which she worked as a professor of art history at the BTU Cottbus. She has been responsible for numerous exhibitions and publications across all Bauhaus themes and artists.

The editor: Peter Gössel runs an agency for museum and exhibition design. He has published TASCHEN monographs on Julius Shulman, R. M. Schindler, John Lautner, and Richard Neutra, as well as several titles in the Basic Architecture series.

Texts and images published on this page are quoted from the official website of Taschen. If you think there is copyright infringement regarding the publications on this page, send a message to the email address on this page.