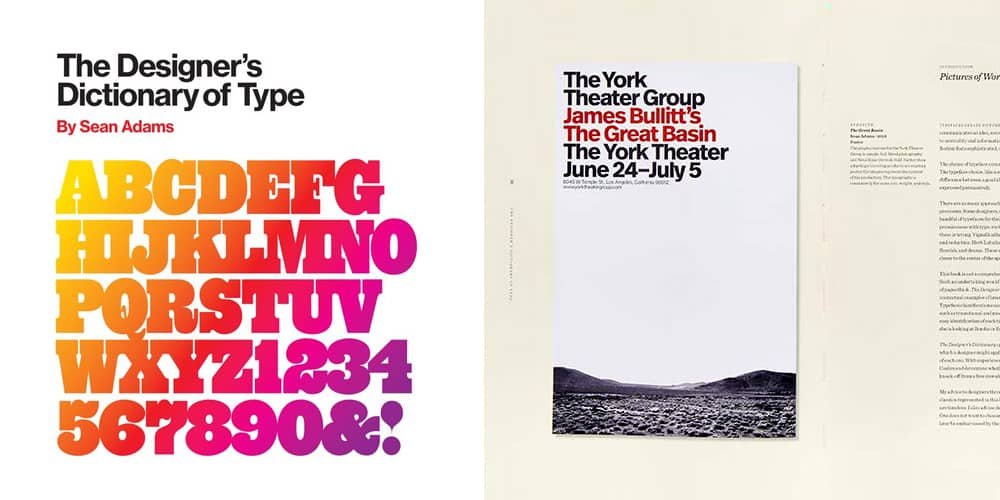 The Designer’s Dictionary of Type follows in the footsteps of The Designer’s Dictionary of Color, providing a vivid and highly accessible look at an even more important graphic design ingredient: Typography. From classic fonts like Garamond and Helvetica to modern-day digital fonts like OCR-A and Keedy Sans, author and designer Sean Adams demystifies 48 major typefaces, describing their history, stylistic traits, and common application.

Adams once again provides eye-catching illustrated examples, this time showcasing the beauty and expressiveness of typography, as employed by the world’s greatest designers. Organized by serif, sans-serif, script, display, and digital typefaces, this book will be a vital guide for designers, teachers, or students looking to gain a foundational understanding of the art, practice, and history of typography.

Sean Adams is a founding partner of the award-winning design firm Adams Norioka, and is cited as one of the 40 most important people shaping design internationally. In addition to being AIGA national president, Adams directs the graphic design program at the Art Center College of Design. Sean is the author of The Designer’s Dictionary of Color. He lives and works in Los Angeles.

Sean Adams is the Chair of Undergraduate and Graduate Graphic Design at ArtCenter, founder of Burning Settlers Cabin studio, and on-screen author for lynda.com/Linked In. He is the only two-term AIGA national president in AIGA’s 100-year history. In 2014, Adams was awarded the AIGA Medal, the highest honor in the profession. He is an AIGA Fellow, and Aspen Design Fellow. He has been recognized by every major competition and publication including; How, Print, Step, Communication Arts, Graphis, AIGA, The Type Directors Club, The British Art Director’s Club, and the Art Director’s Club. Adams has been exhibited often, including a solo exhibition at The San Francisco Museum of Modern Art.

Adams is an author of multiple magazine columns and several best-selling books. He has been cited as one of the forty most important people shaping design internationally, and one of the top ten influential designers in the United States. Previously, Adams was a founding partner at Adams Morioka. His clients have included The Academy of Motion Picture Arts and Sciences, Disney, Mohawk Fine Papers, The Metropolitan Opera, Los Angeles County Museum of Natural History, Richard Meier & Partners, Sundance, and the University of Southern California.