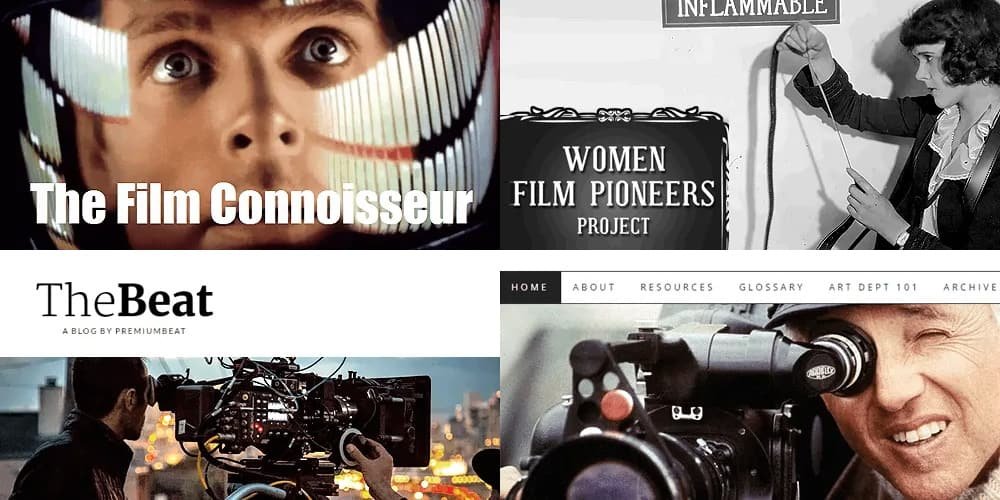 In this article, you can find cinema and film resources where producers in the film industry can get information. The resources on this page will allow you to discover new cinema-related websites. We have compiled blog pages with educational tutorials for film editors for you.

You can also see a website that examines movie dialogues in the cinema industry in this article. This data source provides comprehensive analysis by examining thousands of scenarios. An important initiative that has released one of the largest scenarios analyzes ever. You may also be interested in another statistic about cinema, where thousands of movies are analyzed. The extensive film dialogue research here is a scientific analysis of gender discrimination in Hollywood. You can also take a look at the women film pioneers project. This project honors the women who wrote and directed in the silent film era. You can examine the female producers and screenwriters of the silent cinema era in this important archive.

You can also visit a personal blog page where you can find news about visual effects in cinema. The in-depth visual effects news here will be of interest to those interested in the art of cinema. You may be interested in one of the subculture publications that produce content about fantastic cinema. You should take a look at this page that calls themselves a community of bad movie lovers. In addition, you can find some websites where content related to Turkish cinema is published in this article. The information here will be useful for those who do research on the cinema cultures of different countries. Informative websites for students interested in cinema. Publications containing information for film writers and editors. We hope that photography and cinema resources consisting of valuable blogs will be useful for movie lovers.

Is Film School Required to Become a Filmmaker?

No Film School is one of the quality websites where filmmakers can get information. They argue that it is not necessary to go to film school to become a filmmaker. This blog is a reliable source of information for video makers. You can access content related to the film industry. They provide information by filmmakers to filmmakers. The articles here are made by movie-loving filmmakers.

It covers topics related to shooting techniques. They offer the latest news about film technologies. You can subscribe to weekly podcasts about the film industry. This blog is open to the contributions of people who have productions in the field of cinema. You can send your articles about screenwriting, directing and producing. You can publish your ideas about cinematography, sound, editing or visual effects on this platform. Browse content to help you become a better filmmaker.

Production Design for Film and Television

Everything you see in your favorite movies is created by production designers. Every detail, color, lighting and furniture in the movie sets are carefully designed by the producers. We came across a website where those who are interested in production design in cinema can access quality content. The Art Departmental is one of the resources where you can learn about production design for film and television.

It is a website dedicated to the art and craft of filmmaking. Offers quality educational resources for filmmakers. A community where film and television industry professionals come together in a constructive environment. It appeals to interior design enthusiasts, architects and moviegoers. A useful source of information for those interested in cinema. Check out this website posted by production designer Rose Lagacé. You can learn more about the world of production design and the art department.

VFX Blog is one of the sites that offers quality content on visual effects in cinema. An online source of information for visual effects news. Published by journalist and reporter Ian Failes working in visual effects and animation. VFX animation, filmmaking and VR gaming are among the topics covered. If you are into visual effects, the content here will interest you.

Discover Movies That No One Knows About

A website where you can discover movies that no one knows about. Other Cinema is a blog about Turkish cinema published for cinema lovers. A community of film writers who create cinematic content regardless of vision. It was founded in 2005 by Murat Tolga Şen as a personal blog. It is a subculture publication in the field of the cinema industry. However, over the years it has formed its own identity. The main topic of this website is cinema. There are movie reviews and festival news.

They pay special attention to film genres that fall outside of mainstream cinema. In addition, there are content in areas such as comics, games, series and short films. You can also find articles about fantastic cinema and its sub-genres. This blog was born from the idea of ​​creating a “bad movie lovers community” aimed at social good. Take a look at this blog where valuable pens share their knowledge and experience.

One of the film industry's best analysis is available to readers online. Check out the biggest ever analysis of movie dialogues by gender. Titled Film Dialogue, this research includes a comprehensive scenario analysis of 1980-2010 films. You can find the distribution statistics of dialogues in Hollywood movies by gender. The real data obtained as a result of the analysis has been compiled for the enthusiasts. The data is presented to the reader in an understandable way with visualization.

Dialogues of 25 thousand players consisting of 4 million lines in 2 thousand scenarios were examined. The number of words spoken by male and female characters in the movies was determined. Dialogue percentages were obtained according to the ages of the players. If you're looking for statistics on Hollywood movies, check out this reliable data source.

Analysis Of The Films In The Vision

The Film Connoisseur is one of those personal blogs that publishes cinema-related content. Opinions and analyzes about the films in the vision are included. You can also find reviews of old movies. The films are covered in detail. Check out the carefully written articles for movie buffs.

Another blog about Turkish cinema is Pera Cinema. It is one of the sites that produce Turkish content on behalf of film culture. You can find movie reviews and festival news. Detailed analysis of the films in the vision and examples from world cinema are included. In addition, developments in the field of short films and animation are also discussed. Visit this website that moviegoers can follow with interest.

The Turkish Cinema Studies website is published by the Turkish Science and Art Foundation. It was implemented in partnership with Istanbul Şehir University and with the support of the Istanbul Development Agency. This online archive of information on Turkish cinema has been published since 2014. This comprehensive archive contains information about films produced under the umbrella of Turkish cinema. It is possible to reach the information of books, periodicals and theses related to cinema. It is a quality internet platform that includes people who have worked on cinema. It is a website where content consisting of articles and interviews on this subject is shared.

Another online resource where you can learn about Turkish cinema. Sadi Bey is an independent communication platform for the development of Turkish cinema. It is an independent publication for the benefit of cinema. It has been prepared to serve moviegoers for the development of cinema culture. On this site, there are promotions of films about world cinema. It is open to the participation of members of the press who are interested in cinema. Lists of movies to be released, showtimes and box office lists are included. In addition, cinema-related topics such as movie books, festival and competition announcements were discussed.

Pioneers of Women's Film in the Age of Silent Cinema

The Women Film Pioneers Project is a scholarly resource that explores women's participation in the silent film era. They offer comprehensive information about the women who worked behind the scenes in the silent cinema era. They have a large database of filmmakers and directors in addition to silent era actresses. Also included are screenwriters, script editors and camera operators from the silent film era.

The bibliographic information on this website has been prepared by film scholars, film curators and historians. There are articles about the role of women in the history of the film industry. They also give cinema scholarships to women all over the world. This digital source of information on film history is published with the support of Columbia University. It is one of the reliable references published to encourage research in this field.

One of the websites where video editors and filmmakers can find information is the PremiumBeat blog. PremiumBeat, a Shutterstock company, provides video and sound effects for use in media projects. This company's blog features the latest tips for filmmakers and motion designers. There are tutorials waiting to be discovered by video editors and photographers. Check out content produced by hardworking moviegoers. They offer useful information about cinema and filmmaking.

References: Sources used in the creation of this article.