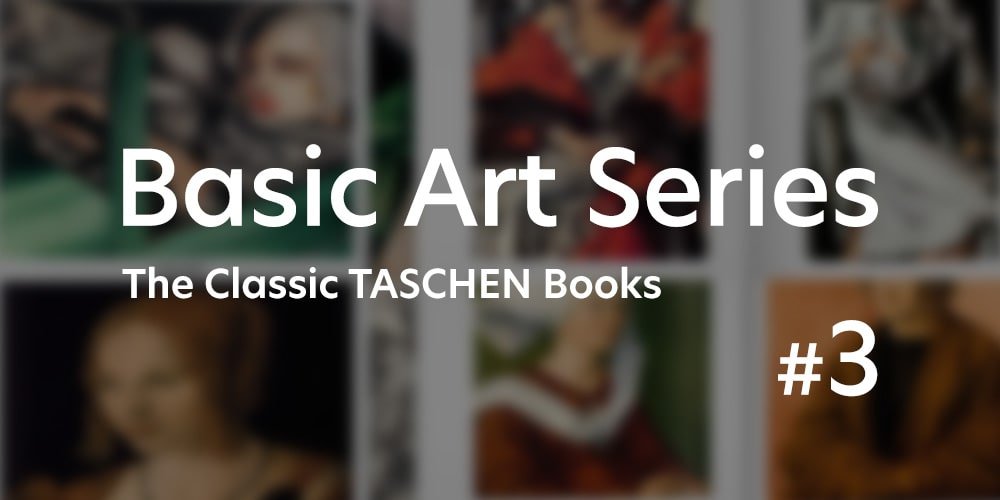 This article gives information about De Lempicka, Degas, Dürer, Egyptian Art books. These art books are part of the Basic Art Series published by TASCHEN. The art books in this article contain comprehensive information for an artist or designer.

Live art in the fast lane with this essential introduction to Tamara de Lempicka, the Russian emigré who moved to Paris, took up painting and left one of the most vivid visual documents of the Roaring Twenties. From her iconic Self-Portrait in the Green Bugatti to portraits of high-society patrons, this book traces the artist’s unique visual language and its privileged place in the annals of interwar art.

Tamara de Lempicka (1898–1980) lived art in the fast lane. With an appetite for glamour and fame as much as Left Bank bohemianism, she fled her native Russia after the Bolshevik revolution and set about taking Paris by storm. Her prolific, monumental oeuvre remains one of the most vivid visual documents of 1920s Art Deco.

De Lempicka’s style deployed cool colors and tight post-cubist forms into an at once neoclassical and voluptuous figuration. Her subjects are often nude and always sensual, aloof, and powerful. Bedecked in seductive light and textures, they command our attention but typically avert their gaze with an aspect of haughty grandeur. They include both high-society patrons and progressive portraits of emancipated and lesbian women, such as Women Bathing and Portrait of Suzy Solidor.

De Lempicka’s notorious Self-Portrait in the Green Bugatti, meanwhile, was commissioned for the cover of German magazine Die Dame and became an icon of speed, sophistication, and female independence. Through some of de Lempicka’s finest, most compelling portraits, this introduction explores the artist’s unique visual language and its privileged place not only in the annals of interwar art but also in the history of female artists and our collective consciousness of the Roaring Twenties.

The author: Gilles Néret (1933–2005) was an art historian, journalist, writer, and museum correspondent. He organized several art retrospectives in Japan and founded the SEIBU Museum and the Wildenstein Gallery in Tokyo. He directed art reviews such as L’Œil and Connaissance des Arts and received the Élie Faure Prize in 1981 for his publications. His TASCHEN titles include Salvador Dalí: The Paintings, Matisse, and Erotica Universalis.

Degas: Dance Class – The Master of Bodies In Motion

Discover the oeuvre of French painter and sculptor Edgar Degas, whose obsession with movement saw him create over 1,500 images of ballerinas. From still lifes to cabarets, horse racing to noisy streets, Degas left no corner of the bustling Parisian entertainments untouched. Resisting categorization, his exploration of physicality inspired, reflected, and ultimately transcended the Impressionist movement. Most commonly associated with the birth of the Impressionist movement in mid-19th-century Paris, Edgar Degas (1834–1917) in fact defied easy categorization and instead developed a unique style, strongly influenced by Old Masters, the body in motion, and everyday urban life.

The elder scion of a wealthy family, Degas cofounded a series of exhibitions of “Impressionist” art, but soon disassociated himself from the group in pursuit of a more realist approach. His subjects centered on the teeming, noisy streets of Paris, as well as its leisure entertainments, such as horse racing, cabarets, and, most particularly, ballet. With often ambitious, off-kilter vantage points, his images of ballerinas numbered approximately 1,500 works, all deeply invested in the physicality and the discipline of dance.

Through illustrations of Foyer de la Danse (1872), Musicians in the Orchestra (1872), and many more, this book provides an essential overview of the artist who created a category all his own, a world of classical resonance, bold compositions, and an endless fascination with movement, which together produced some of the most striking and influential works of the era.

All you need to know about Albrecht Dürer, the German Renaissance polymath whose masterful compositions—including Melancholia I and Knight, Death and the Devil—revolutionized woodcut illustration, engraving, and printmaking, and left an indelible mark on European art.

A polymath of the German Renaissance, Albrecht Dürer (1471–1528) was a prolific artist, theorist, and writer whose works explored everything from religion to art theory to philosophy. His vast body of work includes altarpieces, portraits, self-portraits, watercolors, and books, but is most celebrated for his astonishing collection of woodcut prints, which transformed printmaking from an artisan practice into a whole new art form.

Dürer’s woodcuts astonish in scale as much as detail. Through works such as Apocalypse and the Triumphal Arch for Emperor Maximilian I, he created dense, meticulous compositions that were much larger, much more finely cut, and far more complex than any earlier woodcut efforts. With an ambitious tonal and dynamic range, he introduced a new level of conceptual, emotional, and spiritual intensity.

His two major woodcut series on Christ’s Passion named The Large Passion and The Small Passion after their size, are particularly remarkable for their vivid human treatment of the Christian narrative. In his copper engraving, Melancholia I, meanwhile, Dürer created a startling vision of emotional ennui, often cited as a defining early image of a depressive or melancholic state.

Ever inquisitive, Dürer absorbed ideas not only from masters and fellow artists in Germany but also from Italy, while his own influence extended across Europe for generations to come. In this essential TASCHEN introduction, we explore this pioneering figure’s complex practice, his omnivorous intellect, and the key works which shaped his enduring legacy.

The author: Norbert Wolf graduated in art history, linguistics, and medieval studies at the Universities of Regensburg and Munich, and earned his Ph.D. in 1983. He held visiting professorships in Marburg, Frankfurt, Leipzig, Düsseldorf, Nuremberg-Erlangen, and Innsbruck. His extensive writings on art history include many TASCHEN titles, such as Diego Velázquez, Ernst Ludwig Kirchner, Caspar David Friedrich, Expressionism, Romanesque, Landscape Painting, and Symbolism.

Egyptian Art: From The Land of The Pharaohs – The Finest Treasures of Ancient Egypt

Discover some of the most stunning masterpieces of ancient Egypt. This catalog gathers sarcophagi, statues, murals, and other timeless treasures by unknown masters from the Old Kingdom to the Roman Period. Find out why these centuries-old gems of World Cultural Heritage are displayed alongside masterworks of Michelangelo and da Vinci, from New York to Cairo.

The art of ancient Egypt that has been handed down to us bears no names of its creators, and yet we value the creations of these unknown masters no less than the works of later centuries, such as statues by Michelangelo or the paintings by Leonardo da Vinci. This book introduces some of the most important masterpieces, ranging from the Old Kingdom during the Third millennium BC to the Roman Period.

Featured works include the Seated statue of King Djoser. Wood relief of Hesire on a dining table. Statue of a scribe made of various materials. Funerary relief of Aschait. Sphinx of Sesostris III, Robed statue of Cherihotep, Reliefs from the Temple at Carnac. Sarcophagus of Queen Hatshepsut, Murals from Thebes, Seated figure of the goddess Sachmet. Statue of Queen Teje, Head of Akhenaten (Amenophis IV), Queen Nefertiti. The golden mask of Tutankhamun, Ramses II from Abu Simbel, Horus falcon made of granite, Stone relief from the temple ambulatory at Edfu.

The author: Rose-Marie Hagen was born in Switzerland and studied history, Romance languages, and literature in Lausanne. After further studies in Paris and Florence, she lectured at the American University in Washington, D.C. Rainer Hagen was born in Hamburg and graduated in literature and theater studies in Munich. He later worked for radio and TV, most recently as chief editor of a German public broadcasting service. Together they have collaborated on several TASCHEN titles, including Masterpieces in Detail, Pieter Bruegel, and Francisco de Goya.

Texts and images published on this page are quoted from the official website of Taschen. If you think there is copyright infringement regarding the publications on this page, send a message to the email address on this page.